Aligning your Academic Year with the Calendar Year 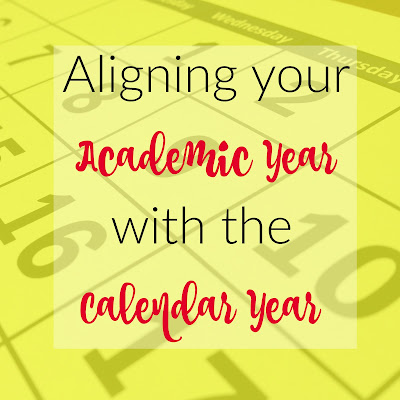 One of many options is the running of our Academic Year. Traditionally in the US, school runs fall to spring with summers off. This is a wonderful option, one which many homeschoolers follow for their Academic Year.  I would like to present another option, which is to align your Academic Year with the calendar.

We fell into aligning our Academic Year with the Calendar Year naturally. My oldest has a birthday in October and our local school district has its cutoff date as August 1. She was entirely ready for "school" at just turned five - reading well and in need of some structure to her days.

(Today I would care more about Charlotte Mason's "A Formidable List of Attainments for a Child of Six." )

While we always knew we'd home educate, and in Ohio we're required to notify in the fall after the child turns 6, M-girl was ready to start. So, after Christmas and N-boy's fourth birthday early in January, we did.

And we haven't stopped using that schedule. I did a brief periscope broadcast on Monday about our schedule:


There were other practicalities to using a calendar year.


There are, of course, challenges.


I think the main thing to remember when Aligning your Academic Year with the Calendar Year is freedom. We are free to build a family culture and make learning a lifestyle as we see fit. So are you. That culture and lifestyle works best when it's flexible, refuses to compare or worry, and acknowledges that there is no real "beginning" or "end" to learning and loving.

For other great homeschool posts, check out The Homeschool Solutions Show.
Posted by dawn at 12:45 PM