Scaffolding and the Homeschool Mom 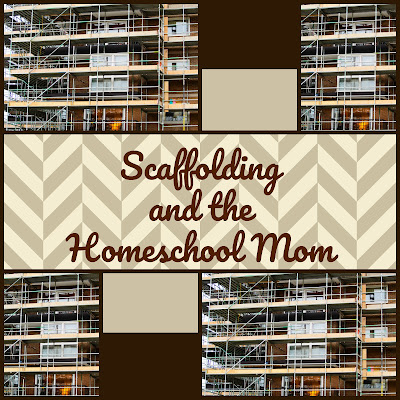 In this series, I'm going to explore what scaffolding does and how it relates to educational lessons. I'd like to consider scaffolding from both the mom's and the child's perspective. I want to think about how to better scaffold lessons in my homeschool.

Won't you come along for the ride?

The summer I was taken to Europe by my parents - almost 20 years ago, now - there was scaffolding on buildings everywhere.  There was scaffolding on buildings both old and new. It stood around the exterior of buildings making wide, sure layers to walk upon. The scaffolding gave the workmen a place from which to do their work. Set firmly and levelly on the ground, the scaffolding tied onto the structure at differing points but was largely separate. It is secure to the building, yet easily removable when the work is finished. It ringed the exterior of buildings.

Scaffolding is made of metal frames: standard, ledger, and transom. These frames are set on firm base plates as a foundation. Sturdy boards are layered on the frames, level boards from which a worker can work in security; without fear. Often workers even 'tie down' to the frame for added safety. Because each level is -ahem- level, they are aided in making the courses of their work - concrete block, brick, stone, or wood - even and of high quality craftsmanship.  This assures that the structure will remain beautiful and solid when the scaffold is removed.

Scaffolding is meant to be temporary. It is removed when the season of work - building, or cleaning, or repair - is complete. Scaffolding itself is not beautiful, but Michelangelo wouldn't have produced beauty without it. That summer I traveled in Europe, the Sistine Chapel even had scaffolding within as the paintings were repaired and cleaned. That was a bummer for us, but it meant that future generations will have the opportunity to see its beauty without the scaffolds. The long run is something to be thankful for.

Scaffolding and the Homeschool

Homeschool Mama - as you think about your child's childhood and education: YOU are building a scaffold.

"Therefore, teaching, talk and tale, however lucid or fascinating, effect nothing until self-activity be set up; that is, self-education is the only possible education; the rest is mere veneer laid on the surface of a child's nature."

True. The child had to grasp hold of the "teaching, talk and tale" and incorporate it into his education, but Mason trained teachers as guides to help students accomplish the work. Building a scaffold for them is how we do it.

I plan to write, at the very least, a post on how scaffolding is safe and transparent, standard and trustworthy, seasonal and temporary. It's not impossible that I'll write more on the series, but this, at least, is where I intend to start. I'd love to hear your thoughts as we go along.