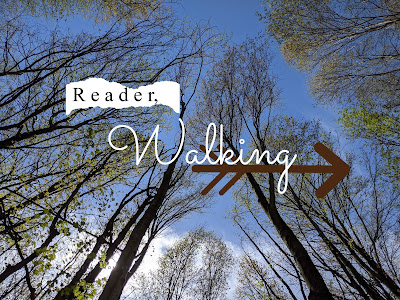 We've been taking three walks each day just out the front door and around our neighborhood. The dog is a fan.

When Jason came home, we sort of fell into a walk before work, a walk with the kids at lunchtime, and a lunch after work. He no longer has an hour and a half of commuting per day and, I have to say, we love having him home and creating liturgies for our day is only part of it.

We have this little patch of woods along a creek ravine in our neighborhood with a gravel trail through it.The part we walk through is probably all of 2, maybe 3, acres and the trail is skinny, down the middle. You can see houses on either side, but we found all kinds of spring flowers and, now in July, fungus along the path.  Our mile-long door to door walks take us along this pathway.

Some of the flowers we saw just in our woods were dutchman's breeches, spring beauties, may apples, blood roots, rue anemone, and more.  It was exciting to see something new almost every walk before the tree canopy filled in.  It was interesting to watch the green start at the ground and slowly move upward until the canopy was filled. There were daily - and sometimes hourly - changes to observe.

We got used to asking oursevles, "what is that?" One thing we asked ourselves this about was an asparagus looking post. It was clearly a plant, but just one stalk shooting upward. 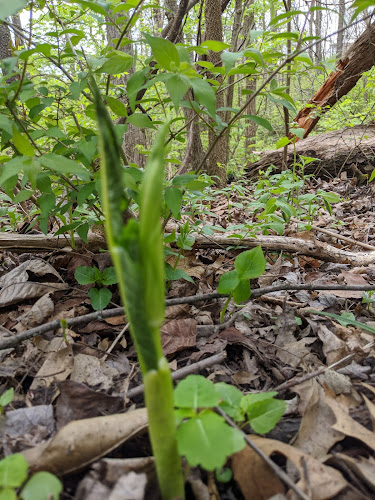 Not many days later, we could tell: Jack-in-the-Pulpit! Right along the path. 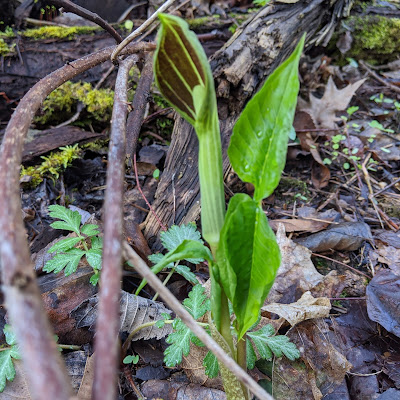 Obviously, these pictures are of different ones, but we did enjoy following one Jack through his maturity. We looked for him every walk, every day. We made friends. 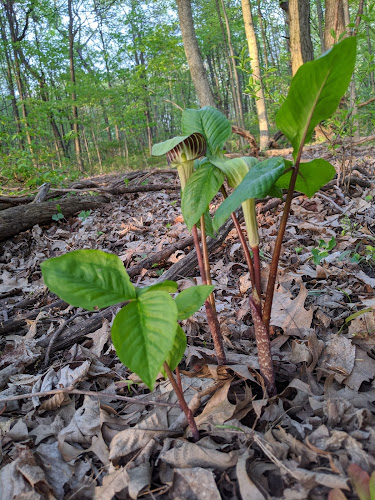 But, getting to know "our" Jack meant we were able to see other Jacks in other Pulpits in other woods. And in our woods. Most of them were tucked back behind in the under tree brush and leaves. There were at least 4 others that we found in the little woods along our path.  One night Jason and I went to another park entirely and had a similar experience to the trout lilies in the previous post - there were so many that we almost couldn't point them all out.  Because we knew our Jack, we knew others nearly instinctively.

Eventually we were able to recognize the leaves once the pulpit was no more.  It wasn't through a lot of effort - I never drew him in my nature journal, for example, it was simply stopping to observe and know a friend daily.

There is something about the familiar. About consistency. Regularly visiting the same trail or path matters.  Karen Glass, in her book In Vital Harmony, emphasizes Charlotte Mason's emphasis on the science of relations, "The first step in forming relations is to become personally acquainted with something concrete--maple trees or tulips or George Washington or a painting by Leonardo DaVinci."  and "forming relationships--learning to care about many things--is the object of education." To do that, we have to put our students and, perhaps more importantly ourselves, in a position to observe and relate. To wonder.

Once we know, we see it everywhere.

I've been reading Madeleine L'Engle's seminal work Walking on Water and she mentions this idea - also found in Mason's writing.

In psychology class in college I remember the professor telling us that if we suddenly become interested in, say, mitochondria, we will come across articles on mitochondria in newspapers and magazines; they will appear to be in the news everywhere. But, if it were not for our particular interest (ahem - relationship), we would not have noticed the articles or turned on the television programs.

We know from our own experience that, let our attention be forcibly drawn to some public character, some startling theory, and for days after we are continually hearing or reading matter which bears on this one subject, just as if all the world were thinking about what occupies our thoughts: the fact being, that the new idea we have received is in the act of growth, and is reaching out after its appropriate food. This process of feeding goes on with peculiar avidity in childhood, and the growth of an idea in the child is proportionably rapid.

Ideas call out to ideas, whether in finding and recognizing Jacks-in-the-pulpit or noticing that our books are talking about the same things and to one another. We build a relationship with ideas, between ideas, between people and ideas, between God and ideas and suddenly find

Oh, that the Lord created such a funny flower as a Jack-in-the-pulpit and that leads to a meditation on Him and how he created such a funny creature as a human, in His image, who relates to flower, other people, and the divine King of the Universe. There is a unity centered in Christ who created and upholds all things.

That's why we make trail friends.
Posted by dawn at 10:28 AM